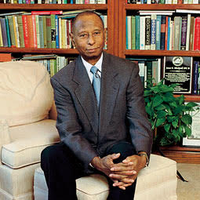 Do you remember the name of someone who directly affected the outcome of your life?

I never forgot the Peace Corps official who came to the airport in Malawi in 1964 to greet us as we stepped off an airplane from America. His name was Dr. James E. Blackwell, and he was the Peace Corps Country Director of Malawi from 1964 to 1966, during the time when my Peace Corps project – called “Malawi IV” – carried out our mission there.  He radiated esprit de corps and made us feel like we were part of a special team – Dr. Blackwell’s team.

After finishing my Peace Corps service in 1967, I left Africa and the years passed. I completed my education, embarked on a career, married and raised a family.  I didn’t know what happened to Dr. Blackwell, but I never forgot him. Over 50 years later, I discovered information about him on the internet.  I learned to my surprise that he had achieved so much but the Peace Corps had never been informed about those accomplishments! I knew then that I had a mission – to inform my fellow Peace Corps members about his distinguished place in history.

On January 30, 2019 – just before the start of Black History Month – I sent an email about Dr. Blackwell and his accomplishments to the Peace Corps country director of Malawi and her staff, as well as all the members of my Peace Corps project. I’m very pleased that my efforts to publicize his contribution resulted in the posting of a Peace Corps profile of Dr. Blackwell on February 11, 2019, in honor of Black History Month.  The profile on the official Peace Corps website referred to the important contributions made by Dr. Blackwell. (https://www.peacecorps.gov/news/library/agency-recognizes-contributions-black-americans-peace-corps/).  It feels so good to know that the information I provided to the Peace Corps allowed Dr. Blackwell to receive his long-overdue accolades, at a time when he and his family could enjoy the recognition.

Sadly, I am now writing to tell you the news of the passing of Dr. James Edward Blackwell (1925-2020), on January 16, 2020, at age 93.  He was an inspiration to me and to all those who knew him. I am grateful to John Krevitt, a fellow member of our “Malawi IV” project, for alerting me to Dr. Blackwell’s passing.

Dr. Blackwell’s obituary was posted on the Legacy website at  https://obits.nola.com/obituaries/nola/obituary.aspx?n=james-edward-blackwell&pid=195119053&fhid=29155 .  It states, among other things, that Dr. Blackwell was preceded in death by his wife, Myrtle Dapremont Blackwell, as well as five sisters and six brothers. It adds “He is survived by a host of loving nieces and nephews, and will be fondly remembered by many colleagues, neighbors, and friends.”

Right after I learned about the death of Dr. Blackwell, I started searching for information about him on the National Peace Corps Association (NPCA) website.   The NPCA maintains an “In Memoriam” monthly blog for online profiles of deceased former Peace Corps Volunteers and staff.  Their “In Memoriam” profiles honor “individuals whose service to their communities far outlived their Peace Corps service” by “celebrat[ing] the work and legacies of these remarkable individuals who inspired their communities at home and abroad.” I checked the NPCA profiles issued in 2020 and could not find one for Dr. Blackwell.  Unfortunately, Dr. Blackwell’s obituary did not mention his service with the Peace Corps, which is probably the reason it did not come to the attention of the NPCA.

Wanting to keep Dr. Blackwell’s legacy alive, I reached out to NPCA and urged them to post a profile of him on their blog.  They agreed, but – due to a shortage of staff – only if I was willing to write it.  It had to be limited to six sentences.

After additional online research regarding Dr. Blackwell’s accomplishments, I submitted a profile of Dr. Blackwell, and my profile was posted by NPCA in their May 2020 “In Memoriam” blog, as follows:

“James Edward Blackwell, Ph.D. (1925-2020), was among the first wave of Peace Corps staff to venture to Africa, serving as Acting Country Director of Tanzania from 1963 to 1964, Country Director of Malawi from 1964 to 1966, and directing a major USAID program in Nepal from 1966 to 1969.  In Malawi, he was responsible for 265 Peace Corps Volunteers who worked as teachers, public health personnel, agricultural extension and community development cadre throughout the country. A prolific writer and researcher in Sociology, he wrote groundbreaking books including The Black Community: Diversity and Unity and Mainstreaming Outsiders: The Production of Black Professionals.  A long-time professor and chair of the Department of Sociology at the University of Massachusetts Boston (1970-1989), he became the first President of the Association of Black Sociologists, and a major consultant to the NAACP Legal Defense Fund and to the Office of the Attorney General for the State of Maryland defending affirmative action programs in higher education.  His collected notes and publications are maintained at the Amistad Research Center at Tulane University.  He was the devoted husband to Myrtle Dapremont Blackwell, the ‘wind beneath his wings,’ his constant travel companion and life partner for fifty-three years, who predeceased him in 2016.”

Here is a link to the profile::  https://www.peacecorpsconnect.org/articles/in-memoriam-may-2020

Those of you who served in “Malawi IV” will remember that Dr. Blackwell came to Chileka Airport to give us a warm greeting and welcome us to Malawi as we stepped off an airplane on September 25, 1964.  We can never forget his confidence and cordiality. He is an inseparable part of our personal history.  A photo of that event was printed in the historic booklet “The Peace Corps in Malawi/Mapisi Koropusi mu Malawi.” (May 1965), which included a Message by the Prime Minister of Malawi, Dr. H. Kamuzu Banda. I am indebted to my son, Daniel, who spent time digitizing and editing the photo.  Dr. Blackwell is wearing a white suit, and stands in the front row, second from left.  Here is the photo: 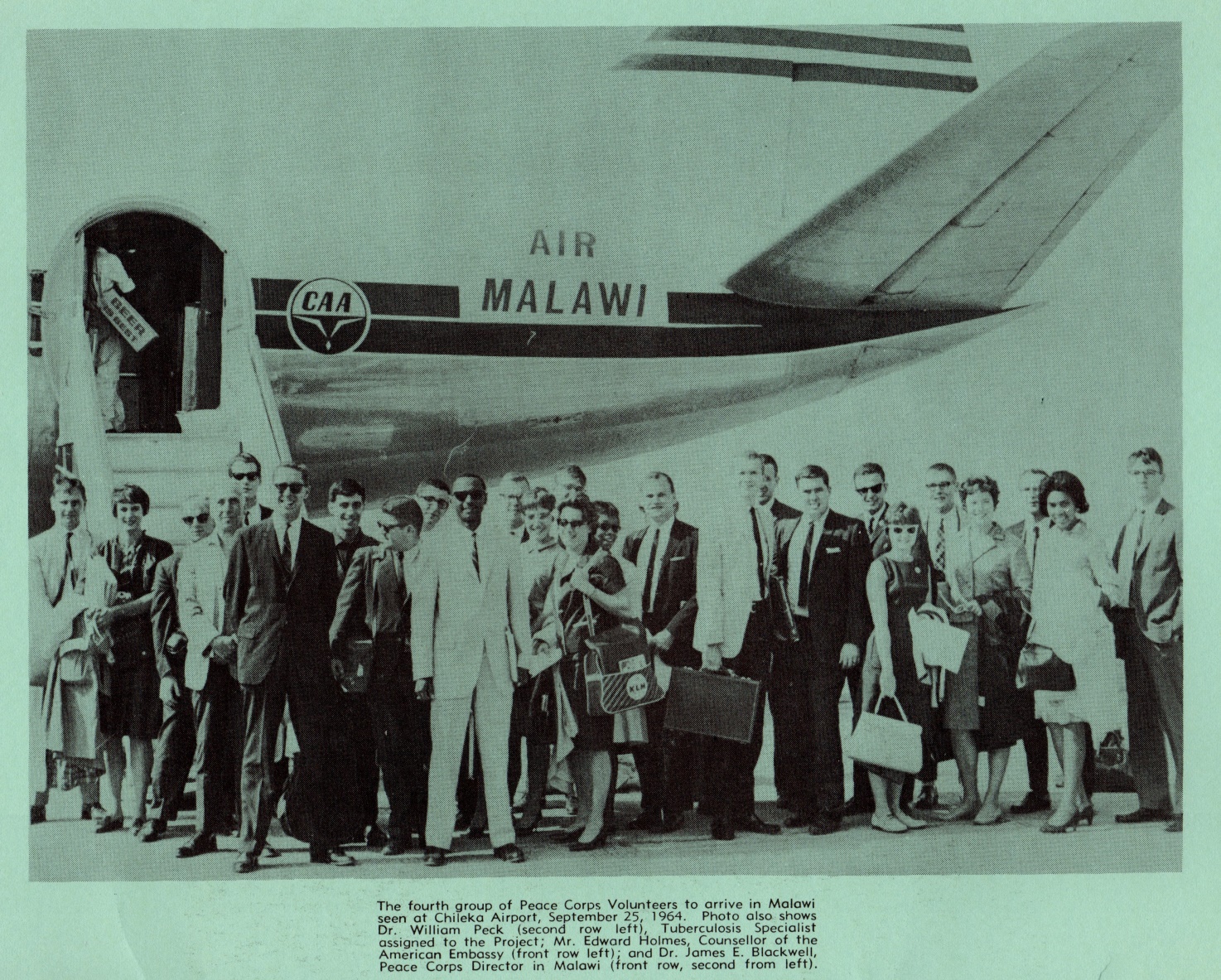 A tribute for Dr. Blackwell that was posted on the USAID “In Memoriam”  website at https://www.usaidalumni.org/alumni/tributes/   Just in case you can’t access it, here is the USAID tribute:

James Edward Blackwell, PhD, departed this life on Thursday, January 16, 2020, at the age of 93.  He was preceded in death by his wife, Myrtle Dapremont Blackwell, his parents, five sisters and six brothers. He is survived by a host of loving nieces and nephews and will be fondly remembered by many colleagues, neighbors and friends.

Dr. Blackwell was a sociologist, educator and consultant who specialized in the study of the sociology and economics of the Black community and the desegregation of higher education institutions in the United States.  Long-time professor and chair of the Department of Sociology at the University of Massachusetts Boston (1970-1989), Dr. Blackwell focused his research on the structure of inequality within major social institutions, particularly in the areas of economics, professional marketplace, and education.

Dr. Blackwell was extensively involved in various professional organizations and was the first President of the Association of Black Sociologists (1970) and received the American Sociological Association’s Dubois-Johnson-Frazier Award in 1986.

He was born in Anniston, Alabama.  He received his Bachelor’s of Science and Masters of Arts degrees from Western Reserve University (1949) and his PhD in Sociology from Western State University (1959).  He held several university teaching positions, as well as a number of high level administrative positions throughout his career.

He was Deputy/Acting Director of the US Peace Corps in Tanganyika (Tanzania) from 1963 to 1964, Director of the Peace Corps in Malawi (1964-66), and Director of the Division of Public Administration and Community Development for USAID in Kathmandu, Nepal (1966-69). In Nepal, he taught English and sociology at the University of Nepal in Katmandu.  He also traveled through the country working with the local population on community development programs, helped to relocate Tibetan refugees in Nepal, and was instrumental in sending 12 Nepalese college students to the US for training in community development and public administration for advanced leadership positions.  Until 1969, Dr. Blackwell divided his time and assignments between Tanzania, Nepal and Malawi.

In response to my tribute, I got a thoughtful email from Dr. Rutledge M. Dennis, one of the sociology professors who contributed to a 2018 biography of Dr. Blackwell in Issues in Race & Society, which I quoted from in my tribute.  He’s a professor of sociology and anthropology at George Mason University in Fairfax, Virginia. It was dated May 24, 2020, and he wrote the following:

Thank you for highlighting Jim's important role in the Peace Corps in Malawi and Tanzania, and for sending this wonderful tribute to fellow Peace Corps colleagues. Jim was a great friend, mentor, and teacher to many of us. We will miss him.

Peace Corps Malawi recently posted a photo of Dr. Blackwell on their P.C. Facebook page. They also quoted me from a message I emailed to Director Lucero-Dwyer : “Dr. Blackwell was a role model to all of us Peace Corps Volunteers in Malawi at that time and he remained a source of inspiration throughout our lives. He went on to earn great respect, admiration, honors and awards. He was a scholar of preeminent distinction.”

Warmest regards to all, and please stay safe,